Salutations to all of you swirlers and sippers of sanguine vino! Times of change are upon us and I hope they find you all doing reasonably well. Summer is nearing an end, school is about to start, and my carefree life of wine drinking and travel is about to come to screeching halt… It appears that in 2 weeks I will no longer be responsible just for myself as we are rapidly approaching the arrival of my new daughter! Hard to believe…

I hope that you all enjoyed the eclipse and that some of you maybe even got to glimpse totality. I did not as I was working (not drinking wine, actually working) but at 96% coverage Bozeman was still a fun place to check it out. It also happened to coincide with my lovely financial manager’s birthday so that was fun. I made sure to let her know that I had played a big role in making sure the eclipse happened on her special day so essentially it counted as a gift I gave her.

Otherwise things have been fairly sedate here in Montana. I have managed to get out for a bit of fishing and rafting, but most of my guided trips this year went unfilled. Ah well, such is life. I was able to attend a tasting with a couple of long time list members going through the differences between Oregon pinot noir and red Burgundy. Said members created a lovely meal of coq au vin, which paired beautifully and the evening was a full success.

Also as the cool weather approaches, that means that hunting season is not far away! So yes, despite my epic failure last year I am gearing up to stock the freezer again. In addition to elk and deer, this year I will also be intent on dropping some game birds. My time window this year will likely be a bit shorter as a newborn doesn’t lend itself to spending 7-10 days at a time tromping through the Montana wilderness, but I have no doubt that given my increased skill set, this year will result in some quality meat for the Newman family.

Before we move on to the wine discussion of the month, you all may recall that I mentioned a website at the end of my last dispatch. Most of you probably didn’t see that note because it was at the very bottom of the email and I’m certain that 99% of you don’t get that far… however I am pleased to inform you that the J Newman Wine Revue is up and running!! I have not finished transferring all of the editions over, but there are several available for further study if you desire. In addition there will be posts of exciting wines and dinners that I am fortunate enough to experience, lists of wine and food pairing options, lists of producers that I am a fan of, and other general wine information that may help you find a perfect bottle or plan a meal. So when you have a minute, check out www.newmanwinerevue.com. I have no doubt you will enjoy it! As it is still in the early stages and a work in progress, I would appreciate any feedback on the design, content, etc. Not that any of you ever actually give me any, but I guess I’ll keep asking anyway.

So with that exciting news, lets move on to wine! I hope that you all found a nice bottle of Gevrey-Chambertin to enjoy or put in the cellar since last time. I certainly had a few and they were all stellar! Given that I ran a little long last month, I am truly going to try to be brief today (yes I know I say that every month). Today we will move back into the US and away from Europe to discuss what is physically the closest region for fine wines to Bozeman. I am talking of course about Walla Walla, Washington! The triple W! This month we will focus on Walla Walla Syrah as this is my personal favorite from the area. Certainly they also produce very good Cabernet based wines and I may mention a few, but the focus will be on the savory Syrah that is produced. Walla Walla is in far south eastern Washington, well away from the cool, rainy weather on the coast and has a climate much more similar to a warm Mediterranean village than to Seattle (please note that the AVA is actually 1/3 in Oregon and 2/3 in Washington as state lines don’t always apply to grape regions). 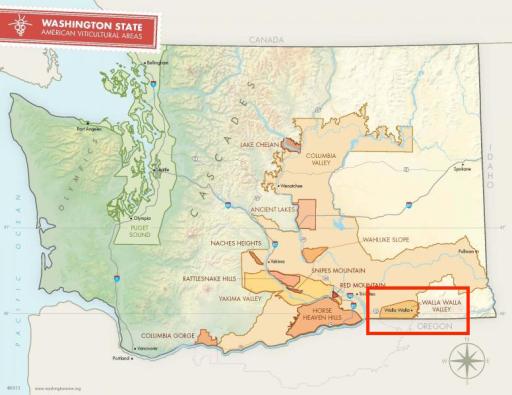 This gives them a great climate to ripen robust, structured reds like Syrah and Cabernet. The weather is warm and relatively dry as they are in the rain shadow of the Cascades. There is water though as the mighty Columbia river is only about 30 miles east of the town. Walla Walla has in fact been an agricultural powerhouse for quite a while. Previously they focused on onions, wheat, and apples, but now grapes are rapidly becoming the primary product! Walla Walla is a young wine region, as are most of the U.S. wine growing areas. The AVA (American viticultural area for those of you who have forgotten) was given official status in 1984. The first vines were actually planted in the area in the 1850s, however the industry died out due to weather, mining, and prohibition. The rebirth began in the 1970s with the opening of Leonetti Cellars in 1977. This was followed by several others not long after and the AVA was off and running. Today there are approximately 3000 acres under the vine and the area is still expanding.

Initially most of the investment was in cabernet sauvignon due to the general popularity of the grape. However, some people began to realize that Walla Walla had solid terroir for syrah. Syrah is now a major player there and in my mind produces the most distinctive wines of the area. The soils, which range from rocky basalt to loess over sand from the Missoula floods, provide different types of wines, but many are delightful. Syrah, you may recall from my discussion on Cornas, is a grape that has its birthplace in the Northern Rhone valley. It is not an overly popular grape when compared to cabernet and pinot noir, however I love it due to the savory, fascinating aromas it can produce. Syrah in general produces a savory wine with smoked meats, olive tapenade, black pepper, and stony mineral notes. There is plenty of fruit as well, with lots of blackberry, raspberry, black currant, and crushed blueberry. This is where Walla Walla syrah generally is a bit different from the Rhone; they are more fruit forward and often have spice notes from oak aging. There are also often bright floral notes or even occasional very sweet candied floral notes. These different scents and flavors certainly make it a different wine, but really enjoyable when you are in the mood for it. So if you have never tried one, I hope you will be willing to roll the dice here.

Syrah is generally a full-bodied wine and this is especially true in Walla Walla. The “body” of wine often comes from the combination of alcohol, glycerol, and tannins. Syrah has all of these things in spades. Especially in Washington where the warm weather allows full ripening, it is not unusual to see syrah pushing 15% alcohol. The thick skins of the syrah grape provide robust tannins and while they are generally quite ripe, they can be intense when young. These are things to keep in mind when pairing syrah with food. The savory aspects of the flavor profile lend themselves well to grilled meats or smoked meats. I generally prefer to have these wines with red meats such as lamb, beef, or game. Certain examples however are excellent with pork or heavier chicken dishes. Olives and herbs provide nice accents to the flavor profiles when thinking about your sides or garnishes. One of my personal favorite pairings is lamb loin chops seasoned with salt, pepper, garlic, and rosemary. Grill these hot and serve medium rare and the combo with a nice Walla Walla syrah can be stellar!

There are many good producers in Walla Walla, and while I certainly haven’t tried them all I do have a few standout favorites; Cayuse is probably number one for me. Christophe Baron who is originally from the Rhone owns this winery. He also has a second winery called Horsepower that is excellent. He produces very savory and “funky” wines with smoke, brined olive, cured meats alongside dark fruits. Unfortunately these wines are pricey (generally $120 or so) and very hard to find as they are kind of “cult” type wines. If you can find one and don’t mind dropping the money, they are worth trying as they are certainly singular wines that are excellent and showcase the region and grape well. They also age very well, so a decade or more in the cellar certainly won’t hurt. My other top 2 are K Vintner’s, owned by Charles Smith, and Reynvaan Family Vineyards. K Vintner’s is the Charles Smith “luxury” brand. He has a couple of other labels that you may see out there also. He initially partnered with Christophe Baron to learn winemaking, as he was initially a rock and roll producer by trade. His wines lean more toward the fruit spectrum and a little less toward the savory. I think these wines are a good option for someone trying syrah for the first time as they are a bit more approachable. He makes several different single vineyard wines, but my favorite tends to be his Syrah “The Beautiful” which is a lovely fruit filled wine with good tension and vibrancy along with some savory notes. His wines are often available in the $30-40 range and occasionally cheaper. Reynvaan is a newer producer that also had some tutelage from Baron while they were getting started and their wines are certainly more in the Cayuse vein. These are savory wines that are addictive for a syrah lover like me. Smoky, spicy, almost salty on the nose with underlying dark briary fruits, these wines have lovely finesse and energy and are not blockbusters by any stretch. Lithe and lovely, this is a great example of Walla Walla syrah. I recently had a 2008 from Reynvaan that was excellent.

Other producers that I thoroughly enjoy include Rotie Cellars, Gramercy Cellars, Dunham, L’Ecole 41, Waters, Dusted Valley, Owen Roe, Seven Hills, and Saviah. I am sure that there are other quality producers out there that I have not yet had a chance to try so don’t restrict yourself to this list alone.

Finally I would be remiss if I did not at least mention Leonetti.  The Figgins family founded this and they are the original Walla Walla spot.  They are a cabernet power rather than syrah, and not cheap (even for Newman level buyers) but they are one of if not the best Washington cabernet out there.  Worth a splurge for a special occasion.  They also make very good merlot.  So again, this is one that if you have a chance to taste it at a reasonable price, don’t miss it!

Well I think that may be a record for brevity… you are welcome although I suspect most of you still won’t make it this far. I do hope that as the fall weather approaches you will fire up a nice hunk of meat on the grill and taste a rich, savory Walla Walla syrah along with it. As always feedback, questions, and comments are welcome. I’ll leave you there for another month (or more, who knows how new parenting will go…) and look forward to hopefully sipping and swirling sensual, sanguine syrahs with you all in the near future.