As I seek to prepare my palate for our upcoming jaunt to Burgundy, I invited a couple of friends over to compare the chardonnay produced in the famous villages of the Côte de Beaune.  Previously I have largely ignored the whites of the Côte d’Or for a couple of reasons; 1 – I love Chablis and figured I would just put all my white Burgundy energy and money there.  2 – I had a couple experiences where I found the whites further south to be heavy, dull, and overly marked by oak which influenced by opinion of the whole region. 3 – Being totally honest, I just get more excited by the pinot noir in the area and that has consumed most of my attention and money.  However, on several occasions in the last 2 years I have been more than pleasantly surprised by the whites from Meursault, Puligny-Montrachet, and Chassagne-Montrachet.  This has led to more interest and a few more in the cellar.  So in an effort to continue the learning process, I thought it would be fun to taste the villages side by side and compare/contrast.  Given that I generally try to avoid drinking 3 bottles myself, I invited some friends to participate and each of us brought a wine to share.  I whipped up a quick dinner of seared scallops with a lemon, white wine, butter sauce and roasted herbed new potatoes.  This proved to be a lovely foil for the wines.

Meursault – the first wine we tried was a 2016 Meursault from Jean Phillipe Fichet.  Meursault is the northern most of the three famous white producing communes and borders Volnay on its northern edge.  In fact a fair amount of red wine is produced here as well, though most is actually sold as Volnay.  Meursault in general is known for wines that have a bit more richness and nutty characteristics compared to its southern neighbors, however it is home to some of the most famous names in white Burgundy production (Coche-Dury, Arnaud Ente, Roulot, etc) which have definitely helped the reputation of the village.  While Meursault does not have a grand cru rated vineyard, it has several good 1er crus including Perrieres, Genevrieres, and Gouttes d’Or.  Fichet is one producer I have tried a few wines from and I have been consistently impressed.  This was no exception.  The wine was lovely with a nose showing lemon zest, hazelnut, peach blossom, and minerality.  The palate was certainly young, but quite delicious.  Ripe, but vibrant fruit, lovely mineral notes, and hints of marzipan.  The finish is very nice and lingers.  A really lovely village wine. 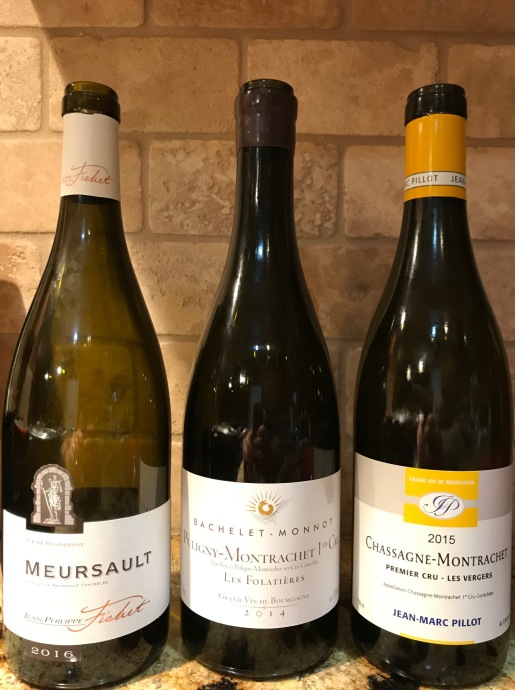 to get my hands on, as well as Les Pucelles directly next to Batard.  Puligny has lots of good producers and the wines are unfortunately relatively pricey.  A producer I’ve tried a few times now and enjoyed is Bachelet-Monnot.  Our next wine was the 2014 Puligny-Montrachet 1er cru Les Folatieres from brothers Marc and Alex.  The wine was lovely, showing more oak on the nose, but not obtrusive in the least; followed by beautiful ripe apple and pear, floral notes of acacia blossom and stony mineral notes.  The palate shows  lovely spice from the oak alongside ripe orchard fruits and baked lemon, a fine bead of minerality.  The acidity is well judged and this overall seems a bit tight still.  I think this will improve with 2-3 more years of aging and hopefully will not run into any premox issues.

Chassagne-Montrachet – the southern most of the famous villages of the Côte, Chassagne claims half of the heralded Le Montrachet vineyard.  The fact that the vineyard is split into each village is what allows them both to claim the name.  Chassagne also has 1/2 of Batard and all of the diminutive Criots-Batard-Montrachet.  The Chassagne wines classically have been thought to be a little rounder and fleshier than the fine, mineral guided wines of Puligny, though the difference in my (albeit limited) experience is fairly small.  The wine we tried from here was from a new producer for me, Jean Marc Pillot.  The 2015 Chassagne-Montrachet 1er cru Les Vergers was also delicious.  You could certainly note the riper vintage, but I did not feel that this detracted from the wine at all. The nose showed ripe orchard fruits, crushed stone, just a hint of spice, and summer floral notes.  The palate showed ripe, rich apple, pear, peach, and even a hint of pineapple, the richer fruit and glycerin delivered from the riper year most evident here.  There was a solid underlying core of acidity that kept this moving beautifully and prevented any sense of heaviness.  I found this to be really delicious and while I think it is probably best enjoyed young for the pure, luscious fruit flavors, it should hold well for a few years.

In the end, all three wines were excellent.  I had trouble picking a wine of the night, vacillating between the purity of the fruit in the Pillot to the nervosité and potential I sensed in the Puligny.  In the end, I think the most enjoyable wine of the night for me was the Chassagne, so I will give it the edge, but all three were excellent and there was none left in any of the bottles at the end of the night!  This was a great way to explore the whites and an impressive showing that will certainly lead me into more exploration in the near future!!